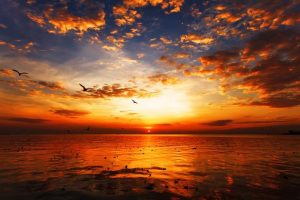 I just finished showing some clients a few beautiful luxury homes with stellar views of the
Pacific Ocean. Those were Wow! moments, soul filling in the literal sense where you suddenly
realize you haven’t been breathing normally.

Always when looking at that view, the question comes up: “So where does the sun actually
set?” Because the only thing more beautiful than the ocean in all of its moods is a blazing
sunset where you can watch a glowing red ball sizzle right into the water way out there on the
horizon, and you can picture a long, narrow burning path reflected across the water coming
right to your feet, and the clouds flash brilliant colors, and you wear out your Instagram or
Facebook followers with picture after picture of it all.

Back to reality. Astronomical reality. Where, really, on that beautiful horizon, does the sun set?
How much of the year can you actually watch the sun sink into the ocean as it wraps up the
day? Can you believe the property description, your agent, or the homeowner?

First, our coastline doesn’t generally run north and south. If you are standing square to the
coastline and looking at the Pacific Ocean, you are tempted to think you are looking west, and
since the sun “sets in the west, well….” Usually, you aren’t. You’re looking southwest, and the
sun will mostly set to your right.

Second, the sunsets travel a lot between December 21, when they are the farthest left (south)
they will go, and June 21, when they are the farthest right (north) they will go. I won’t explain
the astronomy behind this, but you can Google it and spend a fascinating hour refreshing your
memory about things you were supposed to learn in earth science about 50 years ago.

Third, it’s highly unlikely that your agent has ever actually stood on the property both June 21 st
and December 21 st and marked where exactly the sun sets. Instead, it is highly likely that the
agent has heard the owner say, “You can watch the sunsets over the ocean” and has
immediately driven back to the office to include that in the property description.

So what are you to do? How do you know how often you’re going to see sunsets over the ocean
instead of behind the trees or an inconvenient mountain? It’s pretty easy, really.

No amount of fast talking by your agent will change that, so trust the science and set your
expectations. Keep in mind that from September to early December it isn’t going to matter a
whole lot anyway, because it is highly likely that there will be heavy overcast or rain that time
of day. So focus on late December through June. That’s when you are most likely to see the
sunsets.

If you are the sort of person who enjoys this stuff, you would like the app I found for my phone:
Sun Surveyor Lite. It’s free and shows you where the sun will set on any day of the year, among
many other things like times for sunrise and sunset.

By the way, if you’re a photographer, whether amateur or less amateur, this little app has some
very practical value because you can set up shots based on where the sun will actually be,
instead of where you wish it were going to be, any time of day.
Check it out.